You hear this a lot.  Abs are made in the kitchen.  Well you know what else is made in the kitchen?  Cinnamon rolls.  When I started in the fitness realm, I was surrounded by people who enjoyed food and did it for the carbs.  But as I’ve moved around, I felt more pressure to adhere to some standard of diet- like if I wasn’t ‘eating clean’, I wasn’t really meant to be in fitness.  After a workout, I’d go grab a pressed juice but I’d worry that someone would see me also getting that delicious peach crumb muffin from Whole Foods (you know the one that greases through the bag before you get to the register and then greases like 40 napkins before you eat it).   I have been blessed to have a pretty good relationship with food most of my life so why was THIS the thing to shift that? 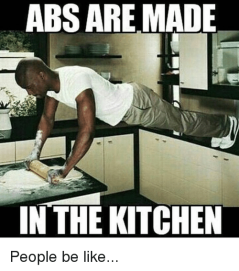 In college, I was the one that people felt okay eating with- because I didn’t talk about calories, I just ate and I enjoyed it.  It was the days of super skinny models, long straight hair, diet coke drinking and chain smoking.  And here I was- curly haired and eating without a care.   But the story behind that is actually much more complex.  I had just developed Crohn’s disease and had almost no handle on it so when I could eat and not be in pain, it was an amazing day.  So turns out, it’s complex for everyone no matter what is showing on the surface.

It wasn’t until I took my daughter to her 5 year check-up that it all clicked together for me.  She’s going through a phase where she will literally eat only hot dogs and hard boiled eggs for her protein.  Girl loves herself some veggies- she’ll down a fennel bulb like an apple and I have to buy like 3 huge broccoli stems just so she gets her “expected” amount.  But she thinks most protein is gross.  When I expressed my concern her doctor said- so what?  Her point was that making a deal of the hot dogs creates a bigger problem because kids need to feel a healthy relationship with food and not feel stress over what they are eating.  **Mind Blown**

So I’m not on a cleanse, I don’t log calories or do cheat days.  Instead, I’m listening to my body.  And if my body says, drive through Dairy Queen and get a dip cone, then I turn that car around.  But seriously, I started the Beachbody 2B Mindset plan and it’s very close to where I want my brain to be- water first, veggies always and if you want to have something “bad”, do it, just don’t linger in it thus becoming a habit.  There are lots of other elements to the diet and plating if you are looking for weight loss.  But overall it’s a way of thinking about food that shines a positive light.  And we could all use a little sun.